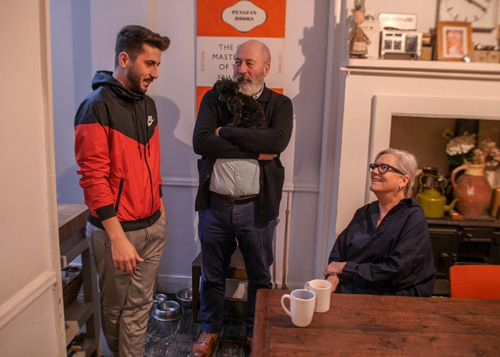 In assembly we were shown two photographs and asked what we could see in them – some people commented on the man swimming and thought that it was the same man in the other photo, some said that the people in the photo looked happy and seemed to be enjoying themselves. They wondered if they were friends. We were then told the story behind the two pictures. The man in the picture is a refugee called Eid Aljazairli who wants to take part in the 2020 Olympics in Tokyo as a swimmer. He is 24 years old and only learned to swim in the last year. Eid is a refugee from Damascus where he left because of war. In London he lives with the family in the other photo. We were told how, since coming to this country, he has been encouraged by all those around him to pursue his dream and how supported he has been and how welcome he has been made to feel. We talked about what the word ‘Refugee’ means – some of us thought it was someone who wanted to come and live in this country but we actually found out that a refugee is someone who has been forced to leave their country in order to escape war, persecution, or natural disaster.
We talked about making people feel welcome and not assuming things about people before finding out about them – as Eid said about being a refugee ‘’I’m proud to be a refugee but I’m not just that, I’m a dreamer. We are people, we are doctors, engineers… when someone loses their home people think they are nothing, that they have no future. But no, we are just people, we are all the same.”