In assembly last week we were shown a photo of two boys. We were asked about similarities and differences between the boys and to talk about anything we noticed in the picture. Some of us noticed that the boys were different heights and some noticed that they were both smiling. Someone pointed out that the taller boy’s face looked different and wondered if he had an accident. Mrs Knipe then told us the story behind the picture.. 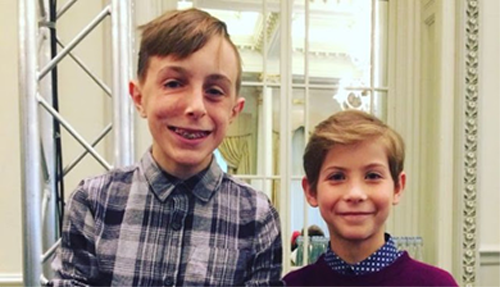 Marcus is a 13 year old boy from Hertfordshire. He is a talented trampolinist who has competed at a national level. Marcus was born with a face that looks different. At school Marcus has experienced bullying ; he has been called many unkind names. He went to a group called Changing Faces to build his confidence and now he is doing well, saying he is not affected by name calling if it happens. Marcus says at his trampoline class, “everybody has always accepted me for who I am and have never asked why I look like I do or stared…. everyone respects you for what you can do and not what you look like.”

A new film has been made about a boy called Auggie who has had a similar experience to Marcus; the photo shows Marcus with the actor who plays Auggie in the film. The message in the film is, “Choose kind”.

We then talked about why it was important not to treat people differently because of how they look or if they have a disability. We talked about all people being given the same opportunities to try and achieve something. We also talked about being kind and how words and the way we look at people can affect them.
We then all agreed that it was important at all times to “Choose kind”

One thought on “Choose Kind”